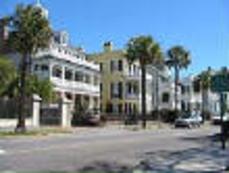 People of the past appear in various forms in this two-act mystery-comedy set on Logan Street in the heart of Charleston, South Carolina’s renowned Historic District.  Indomitable Charleston matron Charlotte Butler raises thousands of flowers to the hum of classical music, cultivates birds, plays championship bridge, ballroom dances, sometimes cleans her own house, and spars with both her parrot Jacob and flighty neighbour Ginny (Gin) Middleton.  Gin's latest flame is the distinguished former New Hampshire Senator Mark Smythe, now an Archdale Street resident, who appears to have a curious interest in Charlotte.  When Gin has to cancel one of her dates with Mark because of an emergency in Savannah, he slips in and visits Charlotte.  The visit proves to be more than one of mere curiosity, as we discover that these two-unique people have much in common.  Charlotte makes Mark accompany her to St. Phillip’s Cemetery at night where they encounter someone she does not want to see.