THE FAIRFAX AND  THE SEVENTH STREET PLAYHOUSE

present a  STAGED READING  of

This two-act dramedy traces the historically significant relationship among Abraham Lincoln, his very closest friend Joshua Fry Speed, and his law partner William H.(Billy) Herndon, from 1837 to 1891 (26 years after the Lincoln assassination).  Both Speed and Herndon played important roles in the legacy of the 16th president.  Oh yes, the Springfield Girls also have their say.  And the boys even help one another on their roads to marriage.  How did the pro-slavery Speed, who shared a bed with Lincoln for four years, help preserve the Union?  How did he deal with Mr. Lincoln’s “black periods”?  Why did Mr. Lincoln choose this man as his only complete friend ever?  Where is the Bible Mr. Speed’s mother gave young Mr. Lincoln (during one of his blue periods) located today? No one showed greater political allegiance to Lincoln than Billy, who wrote one of only two eyewitness biographies of the tragic president.  Lincoln assistants John Hay and John Nicolay’s 10-volume biography is frequently dismissed as too hagiographic.  But Billy’s innumerable eye-popping but questionable assertions about Lincoln and his family have influenced Lincoln biographers from Carl Sandburg and Ida Tarbell to David Donald. But was Mr. Lincoln really a free-thinking agnostic?  Was he illegitimate? Other claims were even more shocking.  Did Herndon forever malign Mary Lincoln because of their mutual hatred (He: “She dances like a serpent;” She: “He’s an uncouth drunkard”)?

Armed Services Retirement Home, Washington, DC, 3700 N. Capitol St., NW. Washington, DC.      The only way on or off the property  is  at the Eagle Gate which is located at the intersection of  Rock Creek Church Road and Upshur Street, NW. No charge.  Reservations Required:    Christina Baldwin   202 541 7630 or christine.baldwin@afrh.gov 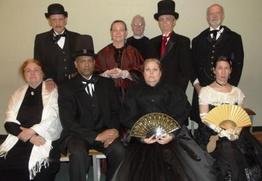