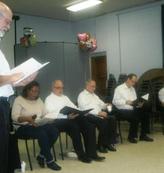 1943: This two-act drama examines forgiveness amidst three conversions. Rome's aloof and scholarly Chief Rabbi Zolli loses faith following the apparent slaughter of his Polish family during the Holocaust. He receives asylum in the Vatican, where he comes to appreciate Jesus as God suffering for humanity. The Rabbi re-finds faith and converts to Roman Catholicism. This is seen as a betrayal of his spiritual duty and a defection to the age-old enemy. Was his conversion one of conviction or merely gratitude? What does he demand at his baptism that eventually removes a major symbol of discrimination? Like Jonah, in choosing a Christian path to God, the Rabbi is faced with forgiving the slaughtering enemy. How will he meet the challenge? Then the next two conversions are as shocking as the first.

Tony, I was so happy to be able to attend the reading yesterday, and to celebrate this second career that you are enjoying. Spectacular to besure. The theme is arresting, the dialog believable and the acting quite
good, in particular Zolli and Sister Angelina.I was particularly interested in the period for two reasons. In the late
50s I took my Masters at an arts school in Florence, the Pius XLL. Institute. Myron Taylor, the steel magnate, had been Ambassador to the
Vatican under President Roosevelt. On leaving his post he left his 15th
Century villa in the hills above Florence (every stick of furniture
intact) to the Vatican as a school for the arts. Because of these close
ties to Pius XLL the students went to Rome each 8th of December and had a
private audience in the Pope's study! I still have pictures of the event.

Another fact. I had a kind of relative, Frank McCool ,a Jesuit priest and
well known biblical scholar, who received his doctorate in
Aramaic-Caldaic in the 40s in Rome and he had studied with your self same
Rabbi. I had never heard that Rabbi Zolli converted however

The questions you raised in the play remain. Zolli certainly was a great
intellectual and scholar, and certainly remained alive because the
Vatican offered sanctuary, but did he convert out of gratitude? You also
did much to cleanse the memory of Pius with respect to the Jews. He
certainly has been villified because of inaction. Maybe he did not do
enough as history judges but he did not stand idly by. As you may have
gathered, I am a Roman Catholic, and these matters have been argued
extensively and I retain a great interest in them.

(Did I see a wedding ring? Did you marry the lady you met dancing and
then went to Europe with?)

Warmest wishes for your continued success. I love hearing of it.