This two-act bio dramedy examines the 71- year, conflicted, triumphal, and daring life of Pierre Charles L’Enfant, designer of the District of Columbia, as his genius is almost overshadowed by his complicated, volatile, and tenacious mien.

If you love Washington, you will love this play, But the scope of his influence is beyond the District of Columbia.  No fewer than 11 other National capitals have heavily borrowed from his design, and the L'Enfant imprint is seen in drawings for at least forty  other projects

His architectural design for the city stands in effect today, making Washington one of the world’s most beautiful capital cities.  How did he manage to acquire the awe and appreciation of George Washington, Alexander Hamilton, Thomas Jefferson, and a whole slew of Founding Fathers, only to lose their trust, confidence, and patience?   Was he indeed L’Enfant Terrible?  Or just Mr. Hardluck?

Born into the opulence of the French aristocracy,  he yearned for the Revolution in America.   Born the son of a prestigious portrait and battle scene panaorma artist in the employe of King Louis XV, L'Enfant developed an eye for battle and developed plans for an imperial capital city..    Pierre (who demanded to be called Peter) wanted to become part of the American revolution.

The play asks what made this foreigner tick with our founding fathers.  Why did they prize him so much, well aware of his faults: self-indulgence, spend thriftiness? And he did not even get to design the Capitol and Whitehouse.

Hamilton and Washington were well pleased with the design but Jefferson was not.  And for one who fought for a Republican democracy, why was he at the center of and pride of y the Society of the Cincinnati, the closest thing to royalty in America.

He died in poverty, being a guest of the Digges family in what is today Ft. Washington, where he overlooked city but never did return to visit it.  Was it the shame of being evicted from Rhodes Tavern and owing $300?  And how about the suit from his personal partner for 8000 dollars which the architect lost.  Even financial founder Robert Morris tried to mediate.

The town of Washington was a mess until the mid-nineteenth century.  John Adams and other presidents totally overlook his design. The grand design impressed so many, but by 1820 very little had been effectuated

But the McMillan commission came in1909 and restored the value of his design.   When he was finally put to rest at Arlington Cemetery with President Taft in attendance, the French Ambassador made a mild understatement.  Pierre L’1enfant yes, wasL'Enfantterribile.  And a genius, so aptly stated by Ambassador Jusserand at the Arngton Ceremony.

And inn the final scene a man called Peter gives a guided tour of the city of Washington which will be enjoyed by all. 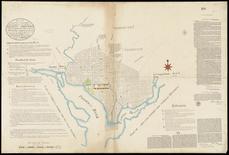