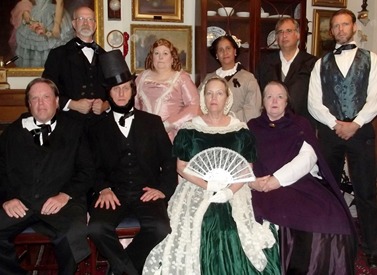 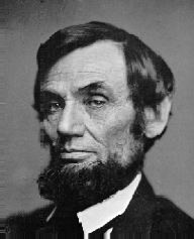 Abraham Lincoln is the only American President who did not claim church membership. This two-act

drama examines the complex relationship between the Nation’s sixteenth President and his God during the
Civil War.   Lincoln’s three -fold Messianic intentions during his entire presidency is to remove the scar

of slavery from the sacred Constitution, preserve the Union, and unite the Nation. “I am anaccidental instrument of

God’s will. ”  And the American people are “God’s almost chosen people.”

And were the incredible oratorical skills of this self-educated man a sign of the Divine Will?

This Messianic fervor, however, is tempered by the fact that both North and South thought that they were fulfilling that divine Mission.  “God wills this contest,’ he often said, implying that the victor in the battle carried God’s favor.    Abraham Lincoln says  “With my own ability I can not succeed without the sustenance of both Divine Providence and of this great free happy and intelligent people.   Without these, I can not succeed, with them I can not fail.” The man at the center of this drama once said “Political sermons from the pulpit and religious speeches from the soap box don’t work for me.  No President should wear his religion on his sleeves.  No clergy should wear his political beliefs on his robe. “Yet he rarely withheld biblical quotations in his political oratory.

Lincoln’s primary communication with God does not come from reading the Word, hearing the Word, or even Prayer, but instead through the experience. Do you hear the word of God?  According to Lincoln “you must let God speak to you through your experience with every deed, dialogue and action you encounter each day.    “So then the Bible is worthless asks Reverend Phineas Gurley.  “It is the most important document in the history of humanity, but only when it is read and acted upon.    If I can not serve the nation, I would rather be assassinated on the spot”

The play traces his conflict with God through his defeats, triumphs, and tragedies as he heard God in the dialogue and actions of those closest to him.    From his arrival in Washington dancing to the Mary Lincoln Polka to the Emancipation Proclamation and Second Inauguration, we follow the president as he clashes with other characters in the cast.  He struggles with his moral decisions with Gurley.   He falls upon God with the collapse of his beloved wife Mary and death of son Willie.  Faithful chief of staff John “Nico” Hay wants  him to do the politically and morally  right thing.   Lincoln must even confront depression, allegations of homosexuality, and séances.    The play ends with the congregation and cast (audience) singing the final sermon in Lincoln’s honor.

Lincoln and God’ at Greenbelt Arts Center by Kim Moeller  DC METRO THEATRE ARTS
The producers, cast, and crew of Lincoln and God must have felt like God was out of town on Friday night as their production experienced one calamity after another. The computer system was down making things difficult for the Box Office but the biggest misfortune of the evening came two hours before curtain when the show’s leading actress playing Mary Todd Lincoln had to be taken to the hospital. Thankfully, she’s OK but she was unable to perform leaving Mrs. Lincoln’s shoes to be filled by costumer and actress Shirley “Shirl” Weaver. Ms. Weaver had been cast to play several small, minor roles in the production but was thrust into the pivotal role and I must say she performed admirably considering the situation. Other parts had to be juggled and Ms. Weaver, understandably, needed to carry script pages with her throughout the evening. There was a scene listed in program set at Ford’s Theatre but not performed.

I am confident this woeful turn of events threw the entire cast off balance resulting in missed cues and forgotten lines. Consequently, out of respect for the cast and production team and after talking with my editor, I am not going to review this production in the traditional sense with the inclusion of stars or endorsements, or lack thereof. I will, however, share some thoughts from the evening.

The two-act drama explores Abraham Lincoln’s relationship with God. Covering the four-year span of time Lincoln was in office, playwright Anthony E. Gallo offers a series of vignettes that that reflects the President’s views, beliefs, and questions about God, church-going, and moral decisions. Meticulously researched, the story focuses on Lincoln’s discussions with Rev. Phineas Densmore Gurley, the pastor of the New York Avenue Presbyterian Church. In the audience discussion with the playwright following the production, Mr. Gallo made clear his point of view that is the foundation of the play: Lincoln was an instrument of God’s will.

While I am always attracted to stories of humanity’s experience with the Divine, Mr. Gallo’s script did not provide enough authenticity to hold my attention. Many lines seem like speeches or recitations rather than realistic dialogue. Too many scenes opened with dry exposition. Ultimately, it felt more like a historical review than a drama about a man struggling to understand God in the midst of the death of his son, the mental deterioration of his wife, and the fight to maintain the unity of the United States in the midst of slavery, secession, and war.

In spite of the dark cloud that seemed to be hanging over the production, there were a number of bright spots.

While it is always difficult to portray an iconic figure, James McDaniel as Abraham Lincoln delivered a superb performance. In an understated way, he commanded attention while on stage and communicated vulnerability as the country’s leader during a time of instability and conflict. McDaniel successfully conveyed a tenderness towards Mary Todd and Lincoln’s despair over the loss of two sons. I found the less-than-authentic beard and wig to be very distracting but it spoke well of Mr. McDaniel’s talent that he was quite believable in spite of it.

David Weaver in the role of Rev. Gurley looked the part of a 19th century pastor. Weaver’s bio says this is a “rare stage appearance” as he is more often found doing technical support for productions. I look forward to seeing him grow as an actor because his face is expressive and he is quite earnest in the role.
Mark Mueller’s performance as the President’s chief of staff, John “Nico” Hay, was particularly noteworthy. As Rev. Gurley delivered Lincoln’s eulogy, my attention was riveted on Mueller in the background as he cleared the President’s office. With an authentic mournful demeanor and subtle actions such as a tender stroke of Lincoln’s stovepipe hat, Mueller expressed his character’s deep sense of loss.
ZSun-nee Matema was completely underutilized in her role as former slave Elizabeth Keckley, dressmaker, and confidant of Mary Todd Lincoln. She shined in the unfortunately rare moments when she had a line to say or action to perform.
Pat Martin (Benjamin Helm, Captain Holmes, John Wilkes Booth) and Sherman McDaniel (Emily Todd Helm) portrayed supporting characters. Even Director Lenny Levy played several roles although he seemed distracted while on stage.
While the set was quite sparse, the costumes (especially the dresses) make up for it in creating a sense of time and place. I did have one issue with the staging. The audience was seated on three sides of the performance area and I was  concerned that folks sitting on the sides experienced far less impact from Lincoln’s speeches because the orations were staged so close to the front of the “stage.’
As Mr. Gallo said while informing us of the casting changes and challenges, “The show must go on!” And it surely did. Kudos to the entire production team for surmounting the obstacles.