The author of two dozen books and thousands of newspaper articles, Margherita Sarfatti is perhaps best known as the one-time lover and longtime companion of Benito Mussolini. She used her privileged relationship with Mussolini to carve out a pivotal role for herself in the official intellectual and artistic life of the Fascist regime. Indeed, as a key figure in the formation of Fascist cultural policy and the construction of the myth of the Duce, she was arguably the most powerful woman in Italy during the 1920s.

Margherita was born in the "Old Ghetto" neighborhood of Venice on April 8, 1880, the fourth child of Emma and Amedeo Grassini, both members of a wealthy and cultivated Venetian Jewish elite. Family friends included Pius X, Guglielmo Marconi, and the novelist Antonio Fogazzaro, while her cousin on her mother's side was Natalia Ginzburg. Although she was baptized a Catholic, Margherita converted to the cause of Marxist socialism in her mid-teens. She married young, at the age of eighteen, to Cesare Sarfatti, an established lawyer, who was thirteen years her senior, in 1898. The couple had two sons: Roberto and Amedeo as well as a daughter, Fiammetta. After the family settled in Milan in 1898, she became immersed socialist political life as a participant in Anna Kuliscioff's salon, art critic for the party daily, L'Avanti! , and proponent of voting rights for women. After Mussolini and radical elements won control of the Socialist party in 1912, Margherita abandoned Kuliscioff and her old reformist patrons and began a romantic and political partnership with the young revolutionary firebrand. Two years later, she followed Mussolini out of the Socialist Party over the issue of Italian intervention in World War I. During the war years, she served as the arts editor of the new newspaper, Il Popolo d'Italia, which he founded in 1915. More importantly, Margherita provided ideas, financing, and emotional support to Mussolini as he struggled to find a new role to play and a constituency to mobilize and lead during the war years.

After the founding of the Fascism in 1919, Margherita played an increasingly influential role in the formulation of the new movement's cultural policies. In 1921, for instance, she became the director of Mussolini's journal, Gerarchia, the principal source of Fascist orthodoxy. Margherita enjoyed her greatest power and influence in the decade that followed the establishment of the dictatorship in the mid-1920s. With the support of the Duce, she emerged, first of all, as the most important promoter of artistic modernism. She was especially instrumental in the founding and promotion of the Novecento, a group of artists in Milan whose members included such prominent figures as Giorgio Morandi and Mario Sironi. Her activities extended well beyond the world of the figurative arts, however. After the death of her husband in 1924, Sarfatti moved to Rome, where she presided over the most important salon of the era. Weekly receptions in her home brought together prominent intellectuals, artists, and political figures. Margherita also was a key architect in promoting the cult of the Duce. Her official biography of Mussolini, Dux, appeared in Italy in 1926. The book was eventually translated into eighteen other languages and helped to shape and bolster the Fascist dictator's image internationally as Italy's savior and the heir to the Caesars of Ancient Rome. Sarfatti's only novel, Il Palazzone, which idealized the fascist restoration of traditional gender relations, appeared in 1929.

By the mid-1930's, Margherita's power and influence began to wane as a result of changing personal and political circumstances. In 1933, Mussolini left her for a new and much younger mistress, Clara Petacci. At the same time, the growing bureaucratization of the Fascist regime limited Sarfatti's ability to dispense patronage on an informal basis as she had in the past. The following year the Duce refused to receive her and had her removed as editor of Gerarchia. Deprived of Mussolini's support, her entourage of friends and supporters melted away and she became increasingly vulnerable to attacks from Fascist extremists, who detested her support of artistic modernism. With the passage of the Racial Laws in 1938 that discriminated against Italians of Jewish ancestry, Fascist authorities suppressed Margherita's articles and her position became untenable. She left Italy in December of that year for Paris. Once World War II began, she fled to Portugal on a passport that Mussolini had provided her. She spent the war years in Uruguay, Argentinaand the United States. Margherita returned to Italy in 1947 where she led a quiet life outside of the limelight. She died at the family villa, Il Soldo, near Lake Como and the Swiss border, on October 30, 1961

Emily gave a wonderful portrayal of a complex character. I was completely drawn into the emotional setting. Bob Cohen added intensity to Emily's more measured delivery. The pairing was near perfect. Jim and Sam were up to their usual high standards of course. 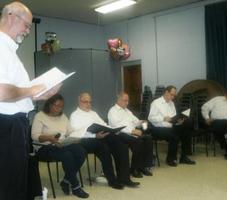 View Videos of all staged readings by clicking here.