If you think you know everything about Lincoln, you may be surprised to find out that there is a great deal of information out there that is not in text books. The Springfield Boys, now playing at The Greenbelt Arts Center, focuses not just on the 16th President, played by Rasik Ohal, but on his life before the Presidency and his friends and family after his death. More specifically, it deals with the life of his good friend, Joshua Speed, (David Weaver). Speed became Lincoln’s friend when he offered him a place to sleep, literally sharing Speed’s own for four years. Speed was a fellow Kentuckian, but pro-slavery. The friendship lasted after Lincoln’s passing even when Speed took over the family farm and had slaves of his own. (Speed was also connected to Jefferson and a cousin of Washington.)

The other character of importance is Billy Herndon, portrayed by Pete Papageorge, the man who was Lincoln’s law partner, sharing an office with The Rail Splitter for many years. However, perhaps due to his negative relationship with Mary Todd Lincoln, (Shirl Weaver), they never really socialized outside the office or political forum.

Much of Act II deals with the friction between Speed, along with the Lincolns, on the biography Herndon wrote several years after Lincoln was assassinated. (Herndon was also instrumental in helping Lincoln in his political career, but he was an alcoholic until a short time before his own death.)

This is an original play by Anthony E. Gallo.  He uses various techniques in the play to tell this story from excerpts of famous speeches, letter writing out loud, to the more traditional encounter dialogue.

The play opens with an exposition by Speed and Herndon setting up the premise and end with Herndon’s wife giving the epilogue from her porch after his death. The dialogue is so full of information you want to hear everything the characters have to say about this man who would shape this country forever. The scenes are never so long that we become bored. The play is at its best when the men write letters to each other. We see a glimpse of why they remained close for so many years. The play fulfills its historical theme by being educational to the audience about Mr. Lincoln and his friends.

Director Beatrix Whitehall ably blocks the actors in this theater in the round (or ¾ square). The pacing is quick despite the many scene changes.  Whitehall has gone a different route when casting. The actors are obviously more of the age of the men at the time of their deaths, but the characters are all relatively young at the start. She does not use make up to try to make them look younger. However, we do accept them in the more youthful years through their body language and speech. She also designed the set and sound. The set is sparse but conveys time and place very simply through several pieces of furniture. The lighting was ably designed by Tommy Zanner. The costumes were in period and fit even the tall Mr. Lincoln.

The three leads, Ohal (Lincoln), D. Weaver (Speed), and Papageorge (Herndon), are very capable in their roles. Ohal has to make us forget that he really looks nothing like Lincoln, but due to good acting that becomes of little consequence. The three men interact well with each other and we come to realize their relationships have both negative and positive aspects.  Weaver and Papageorge are at their best in a confrontation scene after Lincoln’s death which explores the former’s feelings about Herndon’s “scandalous” biography.

The rest of the cast ably supports the three leads. Two standouts were Bruce Smith (Robert Lincoln) (the only survivor of Lincoln’s children to adulthood) when he confronts Herndon about the book he is writing which not only hurts his father’s legacy but reveals truths, or tells lies, about the dead President’s whole family from Lincoln’s mother to Robert himself.

The other memorable scene is the epilogue where we are given the facts after the last encounter of Herndon and Speed by Anna Herndon. Beatrix Whitehall hits the right notes, and we feel we are sitting on the porch with this widow over a cup of tea. The other cast members include Penny Martin, Margaret Bagley, John Starrels, and Grant Bagley.

In this time of our own readying for the next Presidential election you should enjoy seeing just how things went in the early days of our country. You have until this Sunday, July 19th to take this peek at Mr. Lincoln.
Running time: 1 hour and 45 minutes, with an intermission.

Play Takes A New Look At Lincoln As A Man
by Carol Griffith
There’s no need to reinterpret history when the facts are fascinating enough. That must be the credo of Anthony Gallo, whose latest play, The Springfield Boys, is opening at the Greenbelt Arts Center (GAC). Greenbelt is fortunate to have another of his well-researched and factual yet highly entertaining plays here.

The Springfield Boys has a local connection too – it marks the directorial debut of GAC legend Trix Whitehall.

The title refers to Abraham Lincoln and his two lifelong friends, who met in 1837 when the young Lincoln moved to Springfield, Illinois, to begin his law career. The highly talented and experienced Rasik Ohal captures the warmth and dry wit we’ve come to associate with Lincoln and, when reciting Lincoln’s famous speeches, demonstrates oratorical skills that make him totally believable.

On moving to Springfield, the impoverished Lincoln meets Joshua Speed, with whom he rooms and shares a bed. Speed is played by the reliably talented David Weaver. Speed and William (Billy) Herndon, who was to become Lincoln’s longtime law partner and political strategist, become Lincoln’s confidant and fast  friend. For most of the first act, the three embark on their careers and guide each other though romances and marriages. Although Speed and Lincoln differ in their opinions of slavery and the Civil War, Speed remains touchingly loyal to Lincoln, even in the bouts of depression that Speed calls “the black dogs.”

Act 2 shows us the disagreements among Lincoln’s friends after his assassination. While others wrote scholarly biographies of Lincoln, Herndon wrote a controversial book which gave some salacious details of Lincoln’s life. In a powerful scene, Lincoln’s son Robert confronts Herndon about the portrayal of his father. Was Herndon really the “custodian of Lincoln’s legacy,” as he called himself, or in it to make the money he needed after failing at business and having a drinking problem? The multi-talented Pete Papageorge, in his first role at GAC, gives Herndon the right amount of brashness and street smarts.

Except for Joshua Speed’s  mother, Lucy who gives Lincoln a Bible, the women associated with the Springfield Boys support their men. Shirl Weaver plays Mary Todd Lincoln quietly, without the shrewishness often attributed to her.

The costuming deserves a special mention. All of the clothing looks to be of the period without any jarring modern touches. Shirl Weaver made one of her dresses. It’s a work of art.

Gallo is a prolific playwright and many of his plays have gone from Greenbelt to larger stages, including Kennedy Center and in New York. I’d bet The Springfield Boys is destined to join Gallo’s other plays in the limelight.

The Springfield Boys will play on the Friday and Saturday evenings of July 17 and 18 at 8 p.m. A Sunday matinee is scheduled for 2 p.m. on July 19. Reservations may be made through the box office at 301-441-8770 or through the website at greenbeltartscenter. org. The Arts Center is located at 123 Centerway, 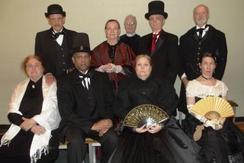 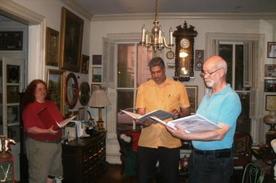 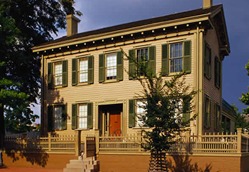