I am very pleased to announce that Mr. Morris! Mr. Morris!  will be performed in January 2021 as a full production at Robert Morris University in Pittsburgh as part of the 100th birthday of the University. I taught my first economics course at that school 1n 1964 when it was still Robert Morris Junior College. 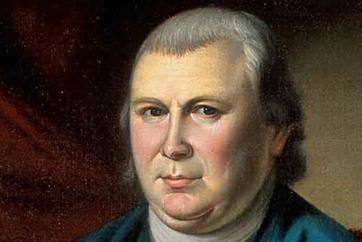 Alexander Hamilton revered him.  Benjamin Franklin prized this fellow-Philadelphian.   None appreciated him more than both President and General George Washington.  Thomas Jefferson thought he was a fox.  But in 1781 they all agreed that only Robert Morris could become the Superintendent of Finance, and save the nation from financial destruction.  And he did. General Washington won the War, but never ceased in his praise of Morris' indispensable financial and economic acumen in confronting Great Britain, the world's greatest economic power.

This two-act dramatization probes the life of Robert Morris, surely  America's most under-appreciated Founding Father, who rose to become the richest man in all of the Americas, found ways of financing the Revolutionary War, laid the groundwork for the economic establishment of the new republic, and died in bankruptcy.         He signed the Declaration of Independence, the Articles of Confederation, and the U.S. Constitution.  As Superintendent of Finance, he financed the American Revolution.   Morris was, next to General George Washington,  the most powerful man in America.

Young Mr.Morris showed he was an entrepreneur when the newly arrived 13-year-old British immigrant singlehandedly purchased flour in Philadelphia and exported it to England at triple the price.  He died in poverty at age 74 after speculating on 16 million acres of American land to be sold to French settlers who never did arrive. He built the largest and most expensive home in North America(Morris Folly), along with investing in hundreds of other industries through leverage. He spent six years in debtors prison and was the only prisoner in American history ever to be visited by a sitting President, the ever grateful George Washington.

And how did he finance this war against Great Britain, the world's most sophisticated and powerful economy? He used his own largesse(for which he was never compensated), borrowed (mainly from France), gambled(mostly arbitrage), stole (privateering), and found a way to collect  the almost impoverished thirteen colonies,   He stood solidly behind the weak currencies of the Continental Congress and the thirteen colonies with the Robert Morris assurance of payment.  Whereas the creditors had no faith in the currency of the Continental Congress or the thirteen colonies, Robert Morris' bills of assurance were accepted worldwide.   As Superintendent of Finance for the new republic, he also procured supplies, ammunition, and provisions for the Colonial army and navy.   President Washington Congress and the  Nation were grateful to this remarkable man without whom, General  Washington flatly stated, the Revolutionary War would not have been won.

He took charge of financing and procurement for the American Revolution by bolstering the value of otherwise valueless currencies of the colonies and the Continental Congress, raising taxes, borrowing from the French and Dutch, privateering (pirating British vessels)  In the process, he acquired the gratitude of the new Nation, and the support of George Washington, John Adams and but others including Thomas Jefferson, Arthur Lee, much of the press and Thomas Paine felt the Robert Morris did not financé the Revolutionary War.  Instead, the Revolutionary War financed Robert Morris.

Hi Tony,
Somehow I had missed Mr. Morris! Mr. Morris! How fascinating. I've just read it from the script posted on your site. I'm glad to see the inclusion of Haym Salomon. I love the exchange with Washington in debtor's prison. And excellent use of the language of Morris's will at the end. Franklin has some lovely lines, too.
Reading L'Enfant in this play, I notice his excellent English. That might be a challenge for your next play - L'Enfant never seemed able to master English, at least in his written words. It will be interesting to see how you capture his voice. Thanks so much for your support,
Ryan
Ryan K. Smith
Department of History
Virginia Commonwealth University 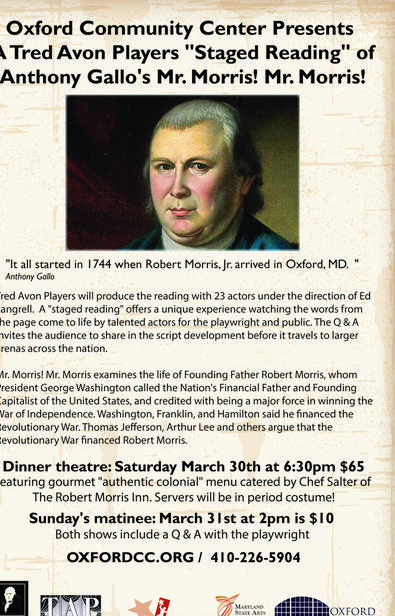