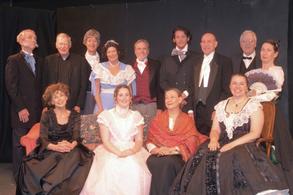 A MUSICAL:Based on the stage play The Eaton woman

A two-act musical about Peggy O/Neill  and Andrew Jackson.  Based on the two=act play The Eaton Woman by  Anthony  E. Gallo.

This musical is not well suited for people who hate gossip. Alabout morals, adultery, rumors of adultery, women’s roles in Washington Society, the quasi downfall of the Jackson Administration in the 1830s, infidelity, and the most beautiful woman in Washington history.   Through 79 years she goes though three husbands raises even more eyebrows when she marries in her late fifties, and spends her last days reminiscing and defending her morality.

Some say she was the most beautiful woman in Washington Power’s history. Others say the most immoral. Others say the most abrasive.  All agree on one thing.  She and her husband, The US secretary of the army, former Army Major, and then Secretary of Defense for Andrew Jackson, created more controversy than any other power couple in power Washington’s Political history. And no one has yet figured out what was the truth.

The daughter of owners of the Franklin Inn in Washington,   Margaret O’Neal Timberlake Eaton Buchignani came to know Washington at birth.   A stunningly attractive  woman,she  becomes a major influence at the White House following death of President Jackson’s beloved Rachel.  She marries Senator John Eaton of Tennessee who is about to become the Secretary of the Army. But the Cabinet wives did not like her, and began the "Petticoat Affair.