October 31,2017 marks the 500th Anniversary of the posting of Martin Luther’s 95 theses, and Dramatist Anthony E. Gallo (’93) is premiering his drama Luther at the Cosmos Theatre in celebration of that event.

The brilliant German Augustinian monk became a major world force, whose posting of 95 theses made him the most loved and hated man in the world of that time.  His contribution to humanity is truly spectacular.   He stood up to the  ecclesiastical authority of the church, founded a new school of theology, founded his own church, translated the Bible into German wrote some of the most beautiful hymns of Christianity.   Today one out of every 20 Christians is a Lutheran and one of every ten Protestants.   Yet he forgot the most basic of Christ’s commands—Love thy Neighbor.  The most basic of Jesus command was to love one another.   In fact, he called for the annihilation of Jews who did not convert.  and peasants who rebelled.

Ironically, the playwright set out to write a largely laudatory drama-the triumph of the spirit -until Gallo realized that this iconic reformer had more in common with Osama Bin Laden than Jesus of Nazareth.

The play delves into the life as he confronts his supporters and opponents in both dreams and reality.

Luther will be performed by the Cosmos Theater Players    Audience participation and discussion follows. 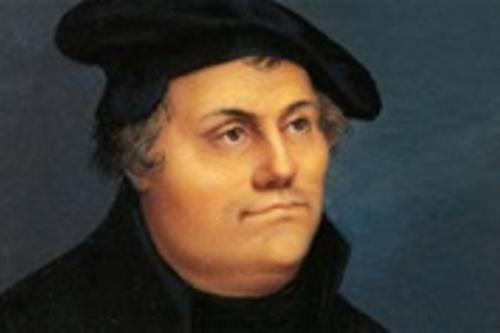 Thank you ever so much for the marvelous time I had yesterday at Cosmos Theatre.  You held my attention completely -- I was captivated by the story, dialogue, and acting.  I knew little about Martin Luther and am now curious to learn more.  I loved the way you used the cast as a chorus -- it worked really well.  (Particular interest therein since my background in Greek tragedy).

Stan and Star, as Martin Luther and Katherina, were spectacular.  They really seemed a married couple in love and in a good marriage, for which humor is essential.

I thought your play was outstanding.  I thought about it during the evening and this morning which I never do. Please continue to work on it.  I think when edited and improved it could do very well indeed.    I really enjoyed the performance.

I am crafting a review, but it may take a while due to the fascinating complexity, depth of the knew to me subject and the raw pleasure - not yet fully comprehended - of the whole experience. You MUST stage it in costumes, in a large old London theater with the red chairs, on a turntable. Sophie reported back at home that she saw famous Mr Luther and had lunch with the lemon cookie. You please everyone! Review to follow

Luther was very well received. Everyone I spoke with enjoyed it. The cast looked so professional and well rehearsed. I enjoyed particularly  showing up with no work to do and simply sit back and be entertained

Thank you very much for inviting me to see your latest work, “Luther”. You and your Seventh Street Playhouse group did a great job. I continue to find it quite hard to believe that you only rehearse a couple times before performing your works before an audience. Kudos to your entire team for pulling it all together in such a short time!

The reading was quite thought provoking; so much so that I left the Cosmos Club and educated myself by reading more about him on the internet. I liked the parts of his life that you chose to convey in your script. (I did not realize that later in Luther's life, he turned against the peasants and Jews.)

I appreciated your music selections which I found added authenticity to the reading. Just as I appreciated the occasional use of the bawdy language, since I understand that is the way Luther spoke. That plus it provided a bit of levity during the performance.

I hope you and your Seventh Street Players consider performing “Luther” again as I’d like to see it at least once or twice more.

Thank you again for sharing such a great opportunity with me. I always look forward to your performances and will continue to attend as often as I can - as long as the locations as bicycle accessible!!  🚴‍♀️

I am crafting a review, but it may take a while due to the fascinating complexity, depth of the knew to me subject and the raw pleasure - not yet fully comprehended - of the whole experience. You MUST stage it in costumes, in a large old London theater with the red chairs, on a turntable. Sophie reported back at home that she saw famous Mr Luther and had lunch with the lemon cookie. You please everyone!

I thought the premier went really well today.  The play comes together so much better when we see the entire thing than when we read snippets in CosmosWriters.

Had the Q&A lasted long enough, I would have made the following comment and suggestion.,  I take issue with the person who questioned the dream scene and said it was repetitive.  I view that scene as absolutely necessary, as a reprise to the development between good and evil in Luther.  If anything, I might try to use the scene to sharpen that conflict.  Keep the dialogue between the critics and Luther, especially those jumping on him for anti-semitism and favoring establishment over peasants, but in-between those sequences use your "Greek Chorus" mechanism to remind the viewer of Luther's positives.  That would really leave the viewer with the conflict foremost in mind as s/he walks out.  I would really like to re-read that scene. On a side note, can you recommend one, not terribly lengthy, biography of Luther from among them any you must have consulted?