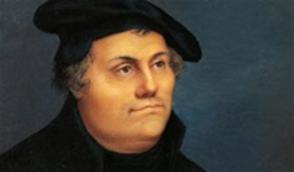 October 31, 2017 marked the 500th anniversary of Martin Luther's nailing of the 95 theses on the door at Castle Church in Wittenberg.  The playwright decided to examine his life in observance of that milestone anniversary.

This two-act play examines the remarkable contributions and failings of Germany's leading theologian of all time.  One out of every ten Protestants today is a Lutheran, as is one of out of every 20 Christians    And the play asks if he had more in common with Osama Bin Laden than with Jesus of Nazareth. How do the extraordinary accomplishments of this reformer and theologian stand up to the greatest of Jesus commandments: Love your neighbor with your whole heart and soul?

Luther valiantly confronted corruption in one the most powerful organizations on earth:  the Roman Catholic Church.  Pope  Leo the  Tenth, a Medici no less, had to raise funds to pay off his lavish ordination as pope.  The ceremony was the most lavish of all time.  More importantly, Leo badly needed funds for the expansion and renovation of St. Peter's Basilica.   The selling of indulgences to remove purgatory time was a profitable method of funding.  Purgatory appears nowhere in Scripture and so the institution that created the concept was now selling indulgences to avoid suffering in that place.

His 95  theses against the Church worked.   Here I stand echoes throughout the world.   His theological treatises have now become major areas of study, and he has already inspired millions of people throughout the world for both his bravery and brilliance. He will become the most famous and influential German theologian and pastor in human history.

But he must be questioned about his call for genocide against two significant groups of the German population:  Peasants and Jews.  In doing this,  the same Christian leader who could discuss the minute detail of Christian doctrine ignored the most important Important commandment:  Love your neighbor as yourself.  Martin Luther called for the slaughter of peasants who rebelled, and all Jews who did not convert to Christianity   Hundreds of thousands of peasants lost their lives during his lifetime.  And his sixty-five page on why and how to persecute Jews would lay the groundwork for mass genocide in future centuries.

This play takes place in dreams and reality.  He faces off with the corrupt and perverted Pope Leo, And then a mystery man appears and harasses Luther on a statement made years ago:  I fear the Devil and sometimes can destroy him with a fart. and then has a contemptuous run-in with Henry VIII, Defender of the Fait   And a man named Peter and the Reverend Mueller seek answers from the most influential  Protestant of all time.   Katherina, the nun he married a quarter of a century ago and shocked the world, consoles him.