FOR TIRELESS SERVICE TO THE NATIONAL PRESS CLUB 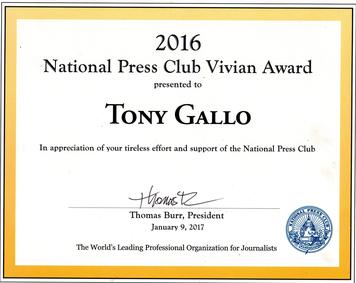 Mr. Gallo, in addition to being a full-time dramatist, is also an experienced journalist.  He has hosted fifty Newsmakers at the National Press  Club(See below) and has been honored with the Vivian Award three consecutive years:  2014,  2015, and 2016. In the private sector, he has written for the Pittsburgh Post- Gazette, the Valley Daily News(New Kensington, PA), the Vandergrift News(Vandergrift, PA), the Flat Hat (William and Mary College),  and the Hi-Newsette(Vandergrift High School).  As a Federal research economist, he was the editor of the Food Marketing Review and the National Food Review and wrote innumerable articles for the Agricultural Outlook and Farm Magazine at the Economic Research Service.  He also wrote for the Survey of Current Business at the United States Department of Commerce.   He was also written for the National Press Club Wire. Three of Mr. Gallo's plays are journalism-oriented:  The Eaton Woman, Vandergrift, and Madame Caillaux.  He has been a member of the National Press Club since 2004. 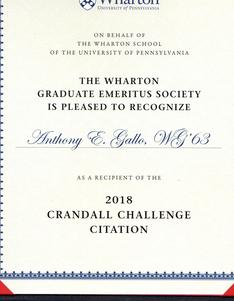